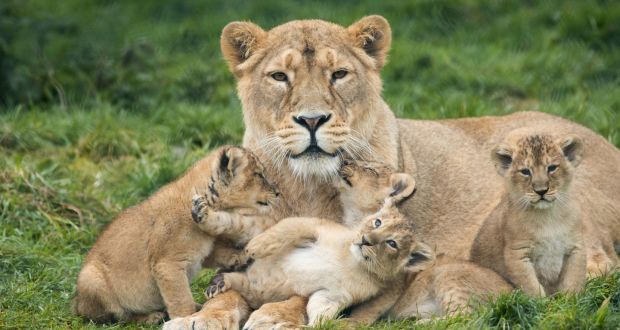 Fota Wildlife Park in Cork has announced the birth of four Asiatic lion cubs (Panthera leo persica) which are part of an endangered subspecies whose last remaining natural habitat is in the state of Gujarat in western India.
The cubs were born to mother, Gira and father, Shanto on February 20th but their sex is not yet known as it is not considered wise to attempt to remove a newborn cub from its mother for examination. There were initially to be five cubs, but one was stillborn.
In a previous litter in 2017, Gira and Shanto had three cubs - females Amira, Arya and male Loki. The three are due to be re-homed soon as part of the European Endangered Species Breeding Programme.
Gira and her sister Gita came to Cork in 2016 from a zoo in Helsinki, Finland, where Amira and Arya will be going to live. A new home for Loki has not yet been identified.
Fota Wildlife Park director Sean McKeown said the pride was doing well and that having a four-strong litter was important when it came to safeguarding the subspecies of lion, of which there are just 500 in the wild.
The Asiatic lion is smaller than its African cousins. Mating is not seasonal and takes place year round. Males reach sexual maturity at around five years and female at around four. The gestation period lasts for between 100 and 119 days after which up to six cubs can be born, but one to three is more usual.
Unlike African lions, the males do not tend to live with the females of their pride unless they are mating or have a large kill to eat.
The Asiatic lion is a carnivore and its typical diet consists of deer, antelope, wild boar and buffalo.

Asiatic lions used to range from Turkey across Asia to eastern India, but the rise of firearms across the world meant that they were hunted to near-extinction for sport.
The male Asiatic lion has a relatively short, sparse and darker mane compared to the fuller mane of the African lion. As a result, the male Asiatic lion’s ears tend to remain visible. The most distinguishing characteristic of the Asiatic lion is the longitudinal fold of skin that runs along its belly, absent in African lions.
Due to conservation initiatives, the small population is steadily increasing but the species is listed as endangered by the International Union for Conservation of Nature (IUCN), as it is still vulnerable to many threats.
According to Fota, an outbreak of contagious disease or natural disaster could have drastic consequences for the species and newborns are vaccinated.
Fota is holding a competition to name the cubs with more details available on fotawildlife.ie.
https://www.irishtimes.com/news/ireland/irish-news/four-asiatic-lion-cubs-successfully-bred-in-fota-wildlife-park-1.3864807
Thu, Apr 18, 2019, 14:52
Tim O'Brien