Bhavesh was treated at the local health centre for minor scratches on his arm. His cattle and the dog are unhurt. 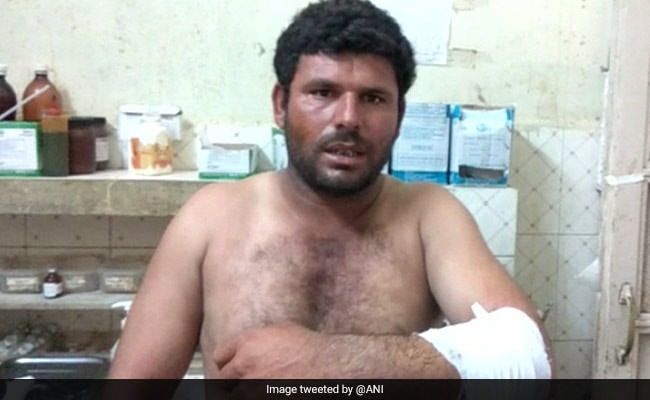 Shepherd was saved by his dog after he was attacked by three lions in Amreli
Others | Edited by Debjani Chatterjee (with inputs from ANI) | Updated: July 23, 2018 17:50 IST

Villager in Gujarat's Amreli escapes lion attack
A shepherd in Gujarat's Amreli was saved by his dog after he was attacked by three lions on July 21. The shepherd, Bhavesh Bharwad managed to escape, with minor injuries on his arm. Bhavesh was trying to save his sheep from being attacked by lions.
The dog, after seeing the lions zeroing in on the man started barking. Villagers nearby hearing the dog's excessive barking and ran out. The lions seeing a large number of people fled into the forests.
Amreli, which is on the outskirts of the Gir forests, has seen many incidents of lion attacks.
Last July, a group of lions had surrounded an ambulance carrying a pregnant woman to the hospital at night. 32-year-old Manguben Makwana delivered her baby in the ambulance after midnight.
Even as she gave birth to a boy, a group of 12 lions had surrounded the vehicle near a remote village in Amreli. During this ordeal, which lasted for around 20 minutes, the paramedic staff of the '108' ambulance tackled the situation with courage and helped Manguben in giving birth, while the lion pride, including three males, blocked the vehicle's way.
In April 2017, a pride of Asiatic lions in Amreli, blocked traffic on the Pipavav-Rajula highway as they were trying to cross over. The video, shot by a driver, shows the lions waiting to get to the other side of the highway but unable to do so due to moving traffic.

COMMENT
Encounters with lions are common in villages on the borders of the sprawling 1,400-sq km Gir wildlife sanctuary, which  is the only natural habitat for the rare Asiatic lions.
https://www.ndtv.com/others-news/in-gujarats-amreli-dog-saves-shepherd-from-lion-attack-1887840