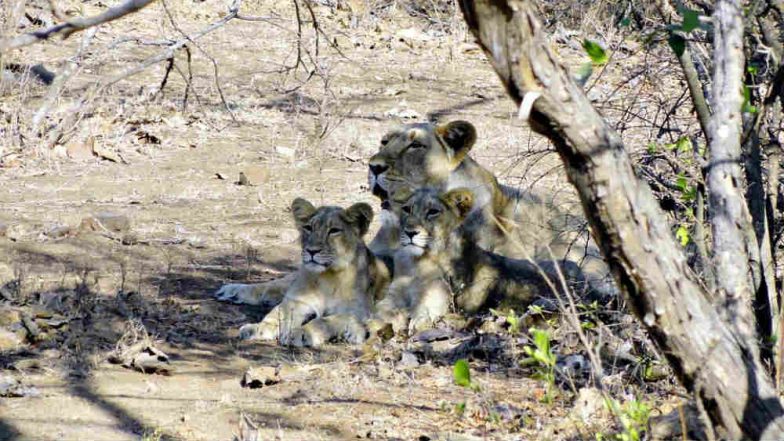 Lions (Photo Credits: Pixabay)
Gir Forest Reserve which is the last abode of Asiatic lions in the world is enhancing its grassland reviving barren land. It is increasing its green cover for the place to become a natural habitat for lions and herbivorous animals. Along with being a hotspot for tourist, the place will become self-sufficient for animals. In the last 30 years, average grass production in this region was 64.4 lakh kg per hectare which has gone up 285% to 180 lakh kg per year in 2017-18 within the last three years. Lions were seen in large numbers in Junagadh and Bhavnagar districts.
S K Mehta, chief conservator of forest (CCF), Junagadh circle told The Times of India, "Gir has the potential to become India’s most famous grassland. The land in this region traditionally produces best quality grass. As it is rocky, there is not much scope for sowing crops."
Meanwhile, the Gujarat government has made laws stringent for those teasing or illegally attracting an Asiatic lion's attention at the Girl National Park and Sanctuary. The state government has prescribed seven years' imprisonment for those not adhering to the rules. The development came after multiple incidents of people luring the wild cat into the open for tourist happened.
For the betterment of the natural spread, an area of around 109 square kilometres in Amreli and Bhavnagar has been declared as "conservation reserve". The Gir National Park and Sanctuary is spread over an area of 1,500 square kilometres in Gujarat. The forest department has decided to increase the number of entries from 30 to 50 during weekdays and 50 to 60 during weekends. Safaris in the area around Mount Girnar in Junagadh city will also be launched shortly.
https://www.latestly.com/social-viral/gujarats-gir-forest-reserve-where-asiatic-lions-thrive-may-soon-become-the-next-big-tourist-attraction-know-how-256172.html