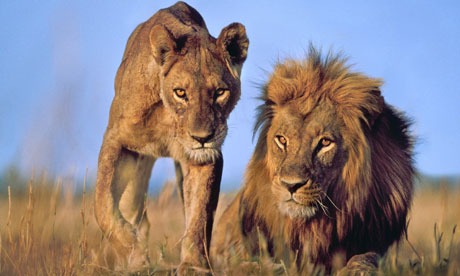 Lions in Botswana. LionAid estimates there are 15,000 wild lions left in the whole of Africa, compared to 200,000 30 years ago. Photograph: Frans Lanting/Corbis
It is known for its vibrant culture, oil wealth and huge human population, but few people associate Nigeria with lions. Now a report says the almost forgotten species of west African lions found in countries such as Nigeria are on the verge of extinction following a decline in recent years.
The UK-based conservation group LionAid says as few as 645 lions remain in the wild in western and central Africa. It says lions are extinct in 25 African nations and virtually extinct in 10, and it estimates that 15,000 wild lions remain on the continent as a whole, compared with about 200,000 30 years ago.
"There has been a catastrophic decline in the populations of lions in Africa, and particularly west Africa," said Dr Pieter Kat, trustee of LionAid. "These lions have been neglected for a very long time and do not have adequate protection programs. They are in real danger of extinction."
The report says west Africa faces particular challenges due to high levels of poverty, lack of political interest in conservation and an underdeveloped wildlife tourism industry.
"Even though the national parks in west Africa contain very distinct and very important fauna compared to eastern Africa, people tend to ignore that west Africa is a very special place," Kat said. "As a result the populations in west Africa are declining so quickly, as a biologist I would say that in a country like Nigeria, which has only 34 lions left, they are already extinct. It's almost impossible to build up a population from such a small number."
The report comes after a series of studies have raised concern about the fate of the African lion. Researchers at Duke University in the US used satellite imagery to conclude that about three-quarters of Africa's wide open savannah had disappeared over the last half a century, and extrapolated lion populations on to data about their available habitats to estimate that 32,000 lions remained.
LionAid says evidence from conservation officials in individual countries, combined with predictions based on the political environment and poverty in African countries, suggests the figure is actually far lower.
A wildlife official in the Nigerian government confirmed that the number of lions in Nigeria was declining fast, with an estimated 34 lions remaining, down from 44 in 2009. "We are doing our best to protect our lions but we are very concerned about them," said Yohanna Saidu, a research officer at Nigeria's interior ministry.
Estimating the precise size of the African lion population is notoriously difficult. Counting them requires bait to be put out to lure each individual animal, which must then be photographed from both sides to ensure no duplication. "Counting lions to the very last individual is humanly impossible. They are difficult to count, and the finances involved simply do not allow such venture," said the African lion expert Sarel van der Merwe.
But there was broad agreement among other conservationists that the LionAid figures were within the range of possible figures. "We put the figure slightly higher, at around 25,000 lions, but whether you use these figures, the LionAid report or the Duke study, there is common agreement among everyone involved in conservation of African lions that the situation is extremely serious," said Will Travers, director of the Born Free foundation. "In west and central Africa there are clusters in Burkina Faso, Niger, the Central African Republic, Cameroon and Chad, but the overall situation is looking dire."
Last year the Fish and Wildlife Service in the US – which is the world's biggest importer of trophy-hunted lions – said it would examine whether the species warranted protection under the Endangered Species Act. Activists say more than 5,600 wild African lions were hunted and exported as trophies(pdf) between 1999 and 2008.
Conservationists argue that lions should be included on the convention on international trade in endangered species list of the most endangered species in the world, affording tight protection on hunting and trade. The Asiatic lion – of which an estimated 200 remain in the wild – is on the list, but no species of African lions are included.
Efforts to impose stricter regulations on the trade in lions and lion parts are being frustrated by a powerful pro-hunting lobby, conservationists say. "We should be moving as speedily as possible to introduce international controls on anything to do with lions, but we are facing huge resistance from the trophy hunting industry," Travers said.
Van der Merwe said: "In central to west Africa, lion numbers are too low to allow any means of negative impact on the populations and hunting should be prohibited, as should any form of killing, irrespective whether a few lions may be habitual livestock killers. Otherwise, we may well lose the lion as a species." 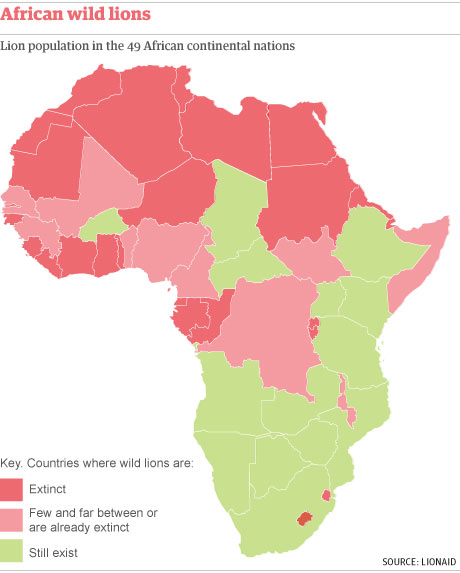 Graphic: Guardian Lions have featured prominently in the imagery of many west African nations since independence. Kat said: "When you look at a lot of the African countries, what you see is that lions feature on their coats of arms, their flags, and are part of their culture, yet as a species they are not being protected. What Africans involved in conservation keep telling me is that we are letting a huge amount of African history and culture that is important in national heritage of African countries just slowly disappear."
Source: http://www.guardian.co.uk/environment/2013/jan/08/west-african-lions-extinction-report