Bhushan Pandya undergoes successful craniovertebral fixation operation in Lilavati Hospital after a fall in the Gir forest in July. 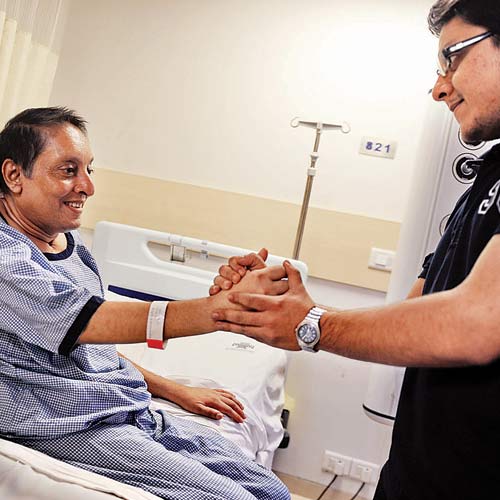 Pandya at the Lilavati Hospital in Bandra. - Puneet Chandhok/DNA
Wildlife photographer Bhushan Pandya, 58, is back on his feet after being bedridden with paralysis since July. The Rajkot-resident had a fall in Gir forest in July this year. Now, an operation and subsequent medical treatment at Lilavati Hospital later, and he is all set to walk out of hospital a healed man.
“When he was air-lifted to the hospital, he had zero power in all four limbs. His head was hanging. It was a tough and critical operation,” said Dr Atul Goel, his consultant neuro-surgeon.
“The impact of the accident was so bad that the bones in the cranio-cervical region (the junction of the skull and neck) was in pieces.”
He further added that they used the technique of ‘craniovertebral fixation’. “This technique was first described by me and Dr V Laheri in 1988 and now used worldwide. We use plates and screws to fix the broken bones. In Pandya’s case it was the toughest task to hunt the broken pieces of bone and fix them,” said Dr Goel.
Talking to dna, Pandya said that he believes he was there at right place at right time that helped him get a second lease of life. “I was on my way to Sasan-Gir in my car to shoot. It was raining heavily that day. My car slipped and toppled. Luckily there was someone behind me who called an ambulance and rushed me to hospital. Seeing my condition, the doctors referred me to Dr Goel as no one wanted to take up such a risky surgery,” said Pandya.
Pandya has been a wildlife photographer for three decades and has been doing conservation-related photography since 1994. “I spoke for the first time after one and half months, after the accident. My family was in tears. For the last two weeks, I am able to walk with support and within weeks I should be able to walk on my own,” said Pandya.
Dr Goel was all praise for Pandya’s willpower. He said, “80 % of people with this kind of injury don’t survive. But Pandya has come out of this and now dreams of playing badminton again and clicking photographs.”
http://www.dnaindia.com/mumbai/report-wildlife-photographer-paralysed-for-4-months-now-healed-1924012